Anybody who’s ever gone to school has probably heard this argument time and time again. A good degree will help you land a good job. But, do the statistics actually confirm this thesis? And, what exactly is a good degree, anyway? In early June, the U.S. Bureau of Labor Statistics released a chart that sheds some light into these issues. The chart does a good job at explaining the correlation between employment rates and education level across demographics. In this article, we will examine the Bureau’s findings and how the numbers stack up for the unemployment rate compared to education level.

What Do the Numbers Show Regarding Unemployment Rate Compared to Education Level? 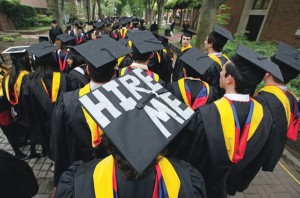 The Bureau’s chart was published on June 6th. It analyzes several levels of educational attainment in citizens age 25 or older. The chart examines the labor force participation rate of high-school dropouts, high school graduates (without a college degree), individuals with some college experience or an associate degree, and recipients of a bachelor’s degrees (or higher education levels). As expected, those who don’t finish high-school have the highest unemployment rate. This level currently stands at 9.1 percent as of May 2014. By comparison, 6.5 percent of high school graduates, 5.5 percent of people with some college, and only 3.2 percent for those who have completed any level of higher education are unemployed.

Since the chart indexes data collected in the first semester of the year and also presents the same figures for May 2013, it’s also interesting to look at how these ratios have evolved. Over the past year, unemployment rates have dropped for all categories. Most notably, the figures dropped from 10.3 percent in May 2013 to the current 9.1 percent for those without a high school diploma. However, the one category that remained stable and low is the unemployment rate of college graduates. This group also makes up the largest population in the civilian labor force. Over 50.2 million people are enrolled. There is currently an employment population ratio of 73 percent in May 2014 (compared to 36 million high-school graduates in the work force for the same month). Indeed, having a college degree pays off in terms of employment later on in life. As such, it’s worth wondering what a quality degree actually entails.

What’s in a High Quality Degree?

The U.S. economy is clearly still recovering from the economic downturn. Things are slowly improving in terms of unemployment rates and economic efficiency. However, this process still has a long way to before we may consider things to be fixed: earning a college degree will not guarantee a great job. In fact, a degree won’t guarantee a job in the first place. As a jobseeker and a graduate, possessing a degree of higher learning does improve your odds at attaining a positive employment status with a high quality career. Your best bet is to find a school with a major in a low-competition field (or a major that isn’t very popular). Ideally, this major will have high levels of employment (despite the lack of competition). Certain medical careers offer such a career track. In fact, several jobs in the medical field made the list for the least stressful jobs in 2013 for this very reason. Careers such as medical records technician, medical laboratory technician, and dietitian provide low stress conditions (along with great pay). Perhaps most importantly, all of these careers are in an industry that’s expected to experience the highest growth segment of the economy over the next ten years. By and large, the medical industry is considered stable. A medical records technician, for instance, will earn a median salary of $32,500, with a job outlook of a 21 percent increase. A medical lab technician has a slightly lower job outlook. However, the outlook is still very solid at 13 per cent. A technician’s salary of $46,800 is quite high for most applicants just starting out.

Of course, you should still choose your major based on your interests, experience, and skills. It doesn’t hurt to think ahead and map out your career as best you can.