Top 8 Cover Letter Mistakes That Are Downgrading Your Applications 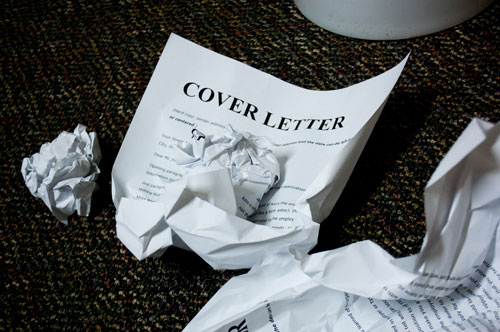 Read our list of dos and don'ts in cover letter writing tips to ensure you kick start the best career possible.

So many things that can affect how a hiring manager perceives your cover letter. In that regard, you have every right to be a bit terrified of the process. While a well-written document almost certainly positions you as the best candidate for a potential employer, a few cover letter mistakes all but guarantee that you won’t be called back for an interview. Besides the obvious no-nos like abhorrent spelling mistakes or rudeness, let’s take a look at the most common mistakes which you may have accidentally included in your own cover letters.

It’s hard to find a one size fits all answer to the question ‘How long should a cover letter be?’ The point is that in order to obtain the right effect and not seem off the rails, your cover letter should be just the right length. It’s hard to pinpoint exactly what too long or too short looks like. If we should start taking a poll among hiring managers on the topic, chances are that the answers we’ll receive will diverge from one another. No need to panic though: most likely, such differences stem from the specifics of each professional niche. If you want to know exactly how long to make your cover letter, take a look at a few other well-rated cover letters from your niche. Then, try to keep yours bit shorter and more to the point.

Addressing a cover letter with phrases such as ‘Dear Sirs’ may end up offending a woman who’s in the position to make a decision about the candidates. ‘Dear Sir or Madam’ is also inadequate and too old-fashioned. The most appropriate formula would be simply write ‘Dear Hiring Manager’. It may sound too plain and formal, but if you don’t know the exact name of the person who will be reading the letter, then it’s the safest bet. Better yet, figure out who the hiring manager is so you can address him or her specifically. This step earns you brownie points by showing the managers that you’re dedicated and vested in the position. Oh, and don’t even think about writing something like ‘Cover Letter to Whom It May Concern’ as a title. This will all but terminate your chances of being hired.

This isn’t only a styling mistake, as the rest of the cover letter mistakes we discuss here tend to be; this is also a breach of etiquette. If you don’t care enough about this job to edit your track records properly, or worse, if you use the same template for all your applications and left the name of another manager or company by mistake in the address, you will come across as careless and quite rude.

4. Too Much Creativity or a Too Personal Tone

Yes, it’s often said that a good cover letter must stand out from the crowd if you want the hiring manager who reads it to notice you and not move on to the next piece of paper from the stacks piling onto their desk. Creativity and a personal, confident and respectful tone are also often advised as methods of standing out from the crowd. The more creative the line of work is, the more creative your cover letter should be both visually and in its writing style. But just erring just a little towards the side of ‘too much’ can make you seem non-serious or arrogant; it’s better to err on the side of caution versus creativity. If you’re still unsure about how to get it right, maybe it would be a good idea to just get a few good cover letter writing tips from an experienced HR professional in your field.

5. Being Boring or Predictable

At the opposite end of the spectrum, we have those cover letters which plainly state some facts in way that sound as if the applicant is actually bored when writing the cover letters in the first place. If no spark of passion or enthusiasm can be detected in the tone, then the hiring manager can’t be at all compelled to consider you for the job based on a few names and titles alone.

Save the negotiation for the actual interview if and when it will take place. Don’t include phrases such as “if you hire me, I will do this”, or “I promise to deliver that”. Also, don’t even begin to touch on pay or benefits, saying things like “I would be tempted to leave my current job and join your ranks for a consistent raise” etc. Bargaining should always be handled delicately even when discussing such details in person. If you do it on paper, it will look much more classless.

7. Giving too Much Info (or Even Gossip) about the Previous Job

When stating the basic required facts about previous positions held, refrain from giving unrequired details about why you left, why the job doesn’t satisfy you, and so on. First of all, they don’t really care at this point of the process (and there will be plenty of time to touch on such aspects in an interview). Second of all, it comes across as bad-mouthing your former employment place. Needless to say, no hiring manager would hire someone like this and completely trust him or her not to gossip about the company.

8. Collecting References and Stuffing Them in the Cover Letter

Another mistake which candidates make is trying to get away with stuffing all the details about their accomplishments in a CV attached to the main cover letter. That’s why a phrase like ‘please find attached my resume’ will be guaranteed to make hiring managers cringe with boredom. To avoid major eye rolls (and not getting that call you’re competing for), just restrain yourself from attaching your CV to the cover letter. There will be time enough for all that later, if the cover letter passes the test.

Those are about all the cover letter mistakes we wanted to point out, since they’re not in the very obvious category. If you take away just one thing from our list, let it be this: address the cover letter as considerately as you can and try to be creative while overall toning down the dramatics as much as possible. People are tired of those and thus appreciate a more genuine presentation more than ever.