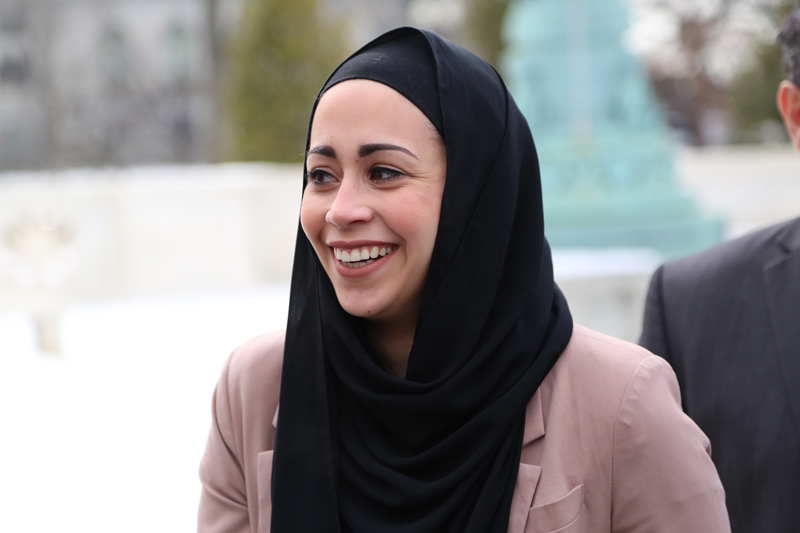 The US government doesn’t always discriminate when it comes to hiring practices. Unlike the recent news of the Federal government meddling in the affairs of a local government’s anti-reproductive discrimination law, sometimes the government does things the right way. This past Monday June 1st, the Supreme Court ruled in favor of a Muslim woman who accused the Abercrombie and Fitch hiring policy of discrimination after she failed to get a job there on the grounds of wearing a black headscarf (hijab) at the interview. In 2008, when she was 17, the woman, named Samantha Elauf (pictured in the featured photo) applied for a job as a ‘model’ for the company. The sales representatives working for Abercrombie and Fitch are all called ‘models’ as part of their branding strategy. Although the assistant store manager she met was impressed with her and her application, she was eventually denied the job over her black headscarf (which was allegedly non-compliant with the company’s Look Policy or the Abercrombie and Fitch Dress Code). This dress code has been prescribed as the college preppy look, specifically.

According to hiring discrimination law, all employers are compelled to accommodate the needs and requirements of their employees if they as much suspect that these needs (such as a special item of clothing, like a hijab) are religiously motivated. Although Samantha Elauf didn’t explicitly say in her interview that she was a Muslim, the Supreme Court judges that ruled in her favor say that her clothing was enough to give the Abercrombie and Fitch representatives at least a hint to her religion, and that this hint was quite enough, legally speaking. At least that was Judge Antonin Scalia’s reasoning for siding with the accuser. Samantha Elauf didn’t sue the company herself, but the federal Equal Employment Opportunity Commission opened up the Abercrombie and Fitch lawsuit on her behalf.

There have been divided legal opinions about this case, with one court (the federal appeals court in Denver) overturning the award of $20,000 which Samantha Elauf had previously won, on the grounds that the company is not liable because Samantha never formally asked Abercrombie and Fitch to relax its clothing policy. Theoretically, if this request had taken place, the company would have had a chance to demonstrate its inclusive intentions by granting the request, relaxing the dress code and allowing anyone to have a hiring chance, whether they wear a hijab or not. (There have been other judges, like Justice Samuel Alito, who didn’t agree with Scalia’s argumentation about the fact that a hint of her religion was enough to make the company liable, although he did agree with the final outcome of the trial.)

What This Abercrombie and Fitch lawsuit Means for Employment Law

Even if the verdict in Samantha’s favor was also overturned at some point during the trial, the real victory of this lawsuit didn’t lie in the $20,000 which were in question, but in achieving a step forward for anti-discrimination hiring policies. Since the dispute broke out in 2008, at the time of Samantha’s failed job application, Abercrombie and Fitch have faced similar lawsuits across the country but managed to settle them by acknowledging their mistakes and relaxing their employee clothing policy. Today, the Abercrombie and Fitch dress code has been formally modified to accept wearing a hijab.

This is good news for the rights of all employees and aspiring employees across the country. The more anti-discriminative the employment policy becomes, the more chances they have to get hired fairly and based on their actual skills. If one company makes its employment policy more inclusive, and these days the role was taken on by Abercrombie and Fitch, more companies will follow and the overall hiring landscape is improved though these little steps. Not only by establishing legal precedent for future lawsuits, but also by making hiring policies of other companies live up to the fairness and equal opportunity standards established by these precedents.