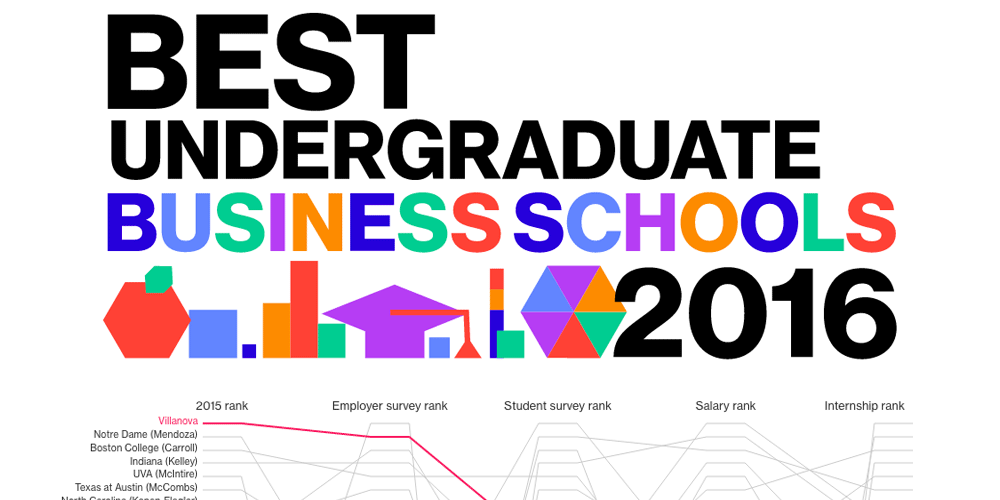 Everyone has heard about the Bloomberg Businessweek school ratings, and most business-niched higher education institutions really used to compete for a place in the Businessweek top of best business schools. Earning a place as high up as possible in their top, based on an allegedly complex system of factors and ratings, was one of the best possible outcomes for any business school, and a major selling point for recruiting new students as well. But in the past few years, their ratings (culminating with the most recent release) started looking peculiar, and not reflecting the common perceptions from the niche about which schools truly are the best.

Fans of the Bloomberg Businessweek claim that the noticed peculiar results can be explained due to the intricate system of measurement and the factors that weigh in the final ratings. This way, they say, even if the results about the best undergraduate business schools may seem counterintuitive in the end, they actually reflect a more complex understanding of the matter of fact. Critics of the Businessweek, on the other hand, state that their ratings have been derailing for a while and maybe it’s just time to admit that they’re not relevant anymore. We tend to agree with them, and here’s why.

The last Businessweek ratings have been published by the magazine on April the 19th, and things couldn’t look messier. The first disappointment is the position of the brilliant Wharton School (of the University of Pennsylvania), widely regarded in the field as the best business program, that only ranks as number 16th in the Bloomberg Businessweek top. It’s unbelievable to any business school expert that institutions like Villanova or Wake Forest or Bentley could be ahead of Wharton, and yet there they are in the top, comfortably ahead of it. Villanova even ranks first according to the recent issue of Businessweek, while two years ago it occupied the 24th position in the top. No matter what extraordinary measures and improvements a school could achieve, it still wouldn’t justify a rise of 23 places in a prestigious top to be accomplished in just 2 years.

As we move further with reading Bloomberg’s top of best business schools, things continue to not add up. World class business programs are pushed down artificially, while big state schools are favored, especially Jesuit Catholic ones (with the exception of three: Villanova, Boston College and Notre Dame). Another shocking example: the Boler School of Business (within John Carrol University) is ranked first by the new Businessweek employer survey results. This puts the humble Boler School ahead of some of the best undergraduate business schools in the world, employer-wise: Wharton, Michigan, NYU, and Berkeley and so on being just a few examples). Wharton even ranks 66th in this employer top – simply unbelievable, considering how much employers pay Wharton graduates even without them having much previous working experience. With such results, the methodology behind these results is more and more doubtable.

The method behind the Businessweek ratings

Speaking of method, it’s worth taking note that Bloomberg Businessweek has already changed it in an effort to become more relevant for the niche, but it apparently didn’t work out so well. According to their own statements, the magazine tried to focus on the career path of graduating students more, to see what schools really rank best. There were thus 4 metrics considered: the survey of employers (weighing 40%), the survey of students (35%), starting salaries in the business work field (15%) and internships during college (weighing 10%). While these don’t sound so bad when trying to discern the best business schools in the world, the true problem with the way the survey was put together seems to be what critics dubbed a ‘journalistic approach’.

That means that the head statistician behind the study valued a larger quantity of data over better chosen info, thinking that more input values will make the overall results more relevant. This is similar to journalists interviewing the first person they find on campus, quoting them in the headline, calling it a day and wrapping the whole story up. This way, the recent Bloomberg Businessweek ratings ended up taking into account the opinion of every recruiter instead of just the best recruiters in the niche, while it is known that many of them actually only work with one business school. Whatever supporters of the study argue, such an approach is bound to bring huge imbalance to the entire assembly.