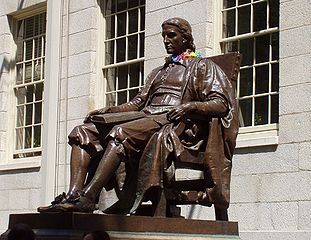 Harvard’s Secondary School Program, or SSP, has earned criticism as of late for taking advantage of high school students’ feverish desire to attend a prestigious Ivy league college. For many, Harvard University is the pinnacle of such a college, and it’s no secret that some high school students attending SSP believe their participation gives them an edge with Harvard admissions.

Critics say, even though no promise of admission is made, the University plays up its Ivy League reputation and admissions expertise to attract new summer students—and thereby generate more revenue. The SSP program guarantees a revenue stream for the University at a time when costly buildings on campus would otherwise remain empty.

The popular SSP program has seen rapid growth in recent years, despite rising fees now exceeding $10,500 for seven weeks of study, including room and board on the Cambridge campus in Massachusetts.

But Mary Camille Izlar, writing for Bloomberg, says that luring high school students into expensive summer programs with no clear return-on-investment has become a “lucrative business.”

‘Pipelines’ of OpportunityHarvard offers courses and activities through its Summer School to students from all over the U.S. and world, including distance learners as well as high schoolers. For 2013, Harvard Summer School says it is hosting 6,000 students, 1,000 of which are currently attending the SSP program for high school students.

“It’s not a pipeline to Harvard but a pipeline to increase the opportunity of higher education at highly selective institutions among local students,” said a Summer School Director.

Still, many high school students are unclear on the issue. These distinctions tend to be lost on starry-eyed 16- and 17-year-olds and parents desperate for a competitive advantage in undergraduate admissions.

For 2013, Harvard is reporting record-low admission rates to its undergraduate programs. Its Summer School is nowhere near as selective as the main institution—although SSP has grown very competitive on its own terms, with first-come, first-serve rolling enrollment capped at 1,000 students.

Most programs aren’t forthcoming with the percentages of summer school participants that are later admitted as regular students. Schools are, however, adamant that their summer courses aren’t ‘feeder’ programs. Harvard says there is no net advantage or disadvantage available to successful summertime students: some get in, some don’t, and others don’t even apply.

“Although we make it clear that admission to the SSP does not ensure acceptance to Harvard College, some students do come to the SSP with hopes that a summer on campus will give them an edge in their application to Harvard,” a spokeswoman said.

“Motivated students,” she said, “will do what ever it takes to get them an edge when competing for coveted spots at the nation’s best colleges.”