Million Student March across US to Protest College Tuition 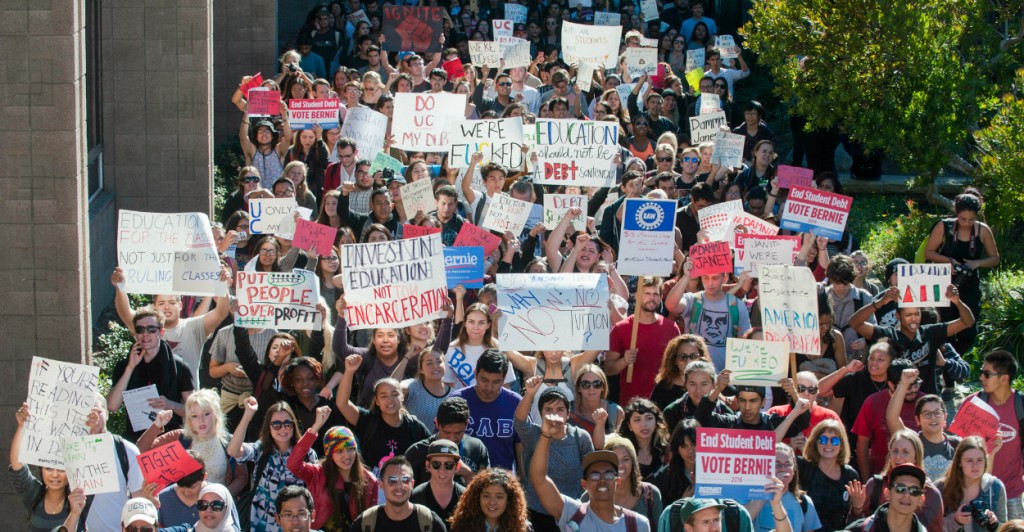 The problem of the rising college tuition fees and of the lack of any sustainable solutions seems to have reached its critical mass point. On Thursday last week (the 12th of November), a so-called million student march took place in several universities across the country, where students simply walked out of their classes in order to form and join a rally. The student protest comes as a reaction to the perpetual postponing of any true debate and solution to the skyrocketing student loan debt. Students from over 100 colleges and college campuses, from Ney York to Los Angeles and beyond, participated in the student protest march.

Some level of change can be anticipated by those who are inclined to be optimistic, considering that the issue of student debt and the unreasonable college tuition levels is part of the agenda of at least one of the presidential candidates for the upcoming race. But the students felt like they can’t allow the situation to continue without their voices being heard, based on promises alone. The statistics for student loan debt are definitely worrisome: students graduating this year will have to pay back an amount larger than $35,000, making them the most indebted generation of graduates ever. Considering that with the current economy, a college diploma isn’t by far a guarantee that the person graduating will have access to the high levels of income required to pay back the student loan debt, this is a bad investment to say the least.

The demands of the student protest participants and organizers, present on their website, on the protest’s Facebook page, and on the signs displayed during the march, are the following:

The Million Student March came just a few days after a similar protest of fast food workers took place in the US, demanding the minimum wage of $15/hour as well, and the right to unionize. In this light, the student protest seems to be part of a larger social movement demanding more security and decent wages for all the social categories who are financially struggling due to current policies.

The mission statement of the Million Student March says: ‘The United States is the richest country in the world, yet students have to take on crippling debt in order to get a college education’. They call on all students, college graduates and campus workers of all types to join them in order to make campuses a more affordable place to the people inhabiting them, and to make education a right instead of a privilege which needs to be paid for greatly.

In a Million Student March interview with one of the protest’s organizers, it was revealed that the spirit of the movement was actually inspired by a comment made by Bernie Sanders, the current Democratic presidential candidate. Earlier this year, the Senator, who raised the issue of college tuition independently on multiple occasions, said that it would probably take a million students to come into the streets and demand a change before the current elected officials would actually feel compelled to solve the student loan debt problem. Bernie Sanders expressed this thought earlier this year in June, during an interview with Katie Couric (from Yahoo). The Democratic candidate has also promised to make this issue a key part of his presidential agenda, and one move he sees as a solution to the college tuition crisis is to impose a tax on all Wall Street transactions. Whether that would be feasible or not remains to be seen; the only certainty of today is that the levels of student loan debt are at a historical high, making college tuition more and more unbearable, so something surely needs to be done about it.